Shipwrecks make great and sometimes dangerous sites for diving. Now, the sunken ships near the island of Cayman Brac aren't really shipwrecks. Instead, these are ships that were sunk on purpose to make sites for exciting diving. The ships are first cleaned of any kind of pollution, such as engine oil. Next, dangerous parts of the ship are removed or disabled. Doorways to dark interior cabins are welded shut so divers can't get trapped in the ship by accident. Finally, the ship is towed to where it will rest on the bottom on a sandy spot where it can be sunk without damaging any of the corals of the reefs. There, it is carefully sunk to make sure it comes to rest where it was intended, creating an exciting dive site as well as a great artificial reef that will attract and protect all kinds of marine life.

This big ship was a Soviet warship, the Frigate 356. Once owned by Cuba, this ship was purchased by Great Britain and taken to the Cayman Islands just to make a great site for diving. Several hundred feet long, this ship attracts many kinds of fishes, including grunts, snappers, and groupers. Several different kinds of corals and sponges are already growing on the surface of this ship.

For scale, you can see ReefNews diver Tessa Dowell floating in the water above the bow of this shipwreck, where she was about 80 feet underwater.

ReefNews President Jonathan Dowell took this picture using a Canon A2 camera with a 28-105 mm zoom lens in an Ikelite housing with an Ikelite strobe. 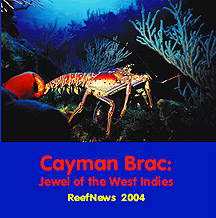 You can see several other pictures of shipwrecks on the ReefNews CD-ROM,
Cayman Brac: Jewel of the West Indies.

Back to the ReefNews home page